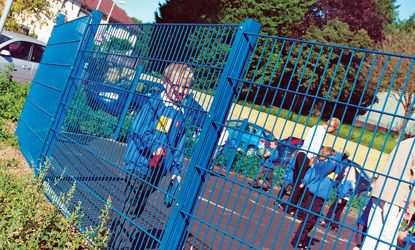 You see them all the time on your daily commute, dog walk, or even as part of your job – children’s playgrounds. Safe areas with swings, slides, ponds, football pitches, tennis courts, and perhaps even a skate park, all securely fenced. The fencing is there just to keep the children safe from the dangers of the outside world, which they’re quite unaware of, right?

Perhaps not. A study by Mississippi State University psychologists shows that children are painfully aware of the dangers of the outside world, and are much happier with the introduction of a fence, although they may not be sure why.

In the study, which was carried out as part of a project to build a safe environment for children’s homes in Alabama, two teachers took their classes of children to a nearby park for an hour. One class went to a park with a secure fence around it, while the other went to a park without any sort of marked boundaries.

The children who went to the park with a secure fence had a great time, and stayed within the fenced area. They played on the play equipment and explored the space with their friends. They told their teacher that they’d enjoyed themselves, and felt safe throughout the experience, whether they were in a direct line of sight with their teacher or not. The teacher noted that they slowly pushed further away from her as play progressed, exploring the safe area provided.

When the other group arrived at the park without a fence, the children were confused. They did not know how far away they could safely go from their teacher. Rather than playing, they clung to their teacher, reluctant to leave the security she was offering in lieu of a fence. Their behaviour was very different to the first group – they were unconfident, scared and clingy. It was not an enjoyable day out for them.

The research concluded that a well designed, fenced area allows children to develop socially, and have confidence in the safety of their environment. It suggested that even open plan areas which had been planned had some sort of demarcated organisation within them, because children benefit from knowing where their environment’s physical boundaries are.

If you’re looking for security fencing for your playground or children’s play area, speak to Zaun about the options available. Children will thank you for it!