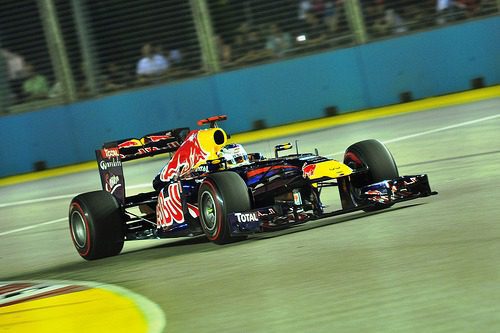 The organiser of the Singapore Grand Prix has admitted it needs to increase security for next year’s event after a British national invaded the track during the Formula One race.

Yogvitam Pravin Dhokia scaled a 1.1 metre fence and wandered through a designated opening, an access point through which marshals can attend to drivers in trouble, before wandering down the circuit towards the 200mph F1 cars, apparently intent on crossing the track.

It was a PR disaster for Formula One and the race organisers, as motorsport is exceptionally dangerous and the spectator’s actions put the drivers’ lives at risk.

The organisers have analysed the incident and have come up with a simple answer to ensure that the crowd does not have access to the track: bigger fences.

“In the affected area where the intrusion occurred, the organiser is considering plans for the installation of higher spectator fences,” read a statement.

“A substantial increase in the number of marshals in attendance at the event is also being evaluated. These marshals would work hand-in-hand with the security personnel in spectator areas.”

While the 1.1 metre fence is the same specification as fencing used at other Grands Prix, clearly this relies on the fans’ goodwill as it simply is not an effective barrier to keep a determined track invader at bay. There have been several incidents over the years where spectators have joined the action on track and F1 might use this as an opportunity to evaluate the fences at every circuit.

It’s a massive undertaking, completely fencing off circuits that are several miles long, but if it isn’t done then it is surely only a matter of time before a tragedy occurs. Formula One could, and should, install anti-climb fencing round the whole perimeter of the track to prevent unauthorised access to the circuit itself.

This fan was apprehended and has now been charged by Singapore police, but it’s an incident that could have ended very differently and the simple introduction of proper perimeter fencing would have been a much safer bet.