Securing the greatest show on earth The eyes of the world were on London and its showcase Olympic Park as an estimated global audience of almost five billion tuned in to London 2012. If ever terrorists wanted a jaw-dropping public target, the main Stratford site and its village of 10,500 athletes was it.

The British government and Games organisers insisted security was tighter than ever before and the perimeter of the Olympic Park allowed only those who had tickets and had been properly vetted to get in to enjoy the greatest show on earth.

The Olympic Delivery Authority turned to Zaun to secure the near 20km boundary of the Olympic Park. A further 1.5km of Zaun fencing provided a ‘ring-within-a- ring’ around the Olympic Stadium.

The design for the Olympic Stadium included VIP emergency gates, which were dubbed the Obama Gates, in case of attack during the highest-profile and most sought-after events, such as Usain Bolt’s historic 100m gold medal triumph.

In total, Zaun worked 30,000 man hours poured 1,400 cubic tonnes of concrete and installed more than 1000 gates It was also on call 24/7 to rectify any issues that arose during the Games.

“We tried to imagine every conceivable security eventuality and protect against it – and Zaun were with us every step of the way, developing new products to meet the demands we place on them.” 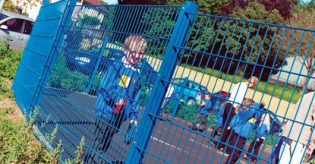 04. Duo6 Perimeter
About Us