To the untrained eye, a fence is just a fence. But when it comes to enclosing sports areas, it can keep balls in play, reduce maintenance, provide safety and security, deter vandalism and graffiti and even be an integral part of the field of play, says Mo Ali, Zaun’s sports systems expert.  He says:

I’m on a mission to better inform specifiers and architects on the many benefits they can reap and risks they can minimise from properly specifying what to most appears to be just a simple sports fence enclosure.

Certainly most specifiers I speak to are surprised at the range of questions I ask before I will recommend the most appropriate fencing solution for their sports area. 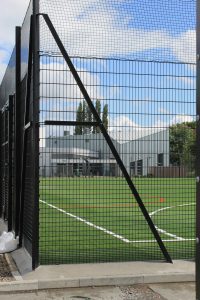 For me it is vital that anything I recommend is functional, safe for users, low maintenance, good value and fits in with its environment. But all of that is largely irrelevant to me if it doesn’t create a place in which I would want to play – and more importantly still that I would want my kids to play in.

And that brings to mind the issues of both safety and security – which is ever more critical for school or council bosses in these days of increased propensity of parents or residents to sue and authorities being seen to do everything in their power to protect children and vulnerable adults.

But before we get onto the risks, let’s address the upside benefits from well-specified fencing.

Firstly, consider how you want your space to be used and what sports are going to be played on it. Our most popular requests are for five-a-side football, basketball and netball, followed by tennis and then hockey. All will require different markings and run-off areas around the pitch or court – and appropriate goal areas, which in the majority of cases can be incorporated into the perimeter fencing with good planning.

So think about the orientation of play – you might want capacity for a full-sized football pitch, with smaller five-a-side variants running at right angles to that.

A single orientation of play might allow you to reduce side fences to just 1.2m to reduce cost and create a less caged-in field of play that is more open and inviting. This may not be possible if the plan is for multiple sports use. We often specify combined basketball hoops and back boards with football goals, or incorporate full size goals with recesses to store them beyond a 3m run-off at the pitch ends, with recesses for smaller goals on the side of a pitch beyond a 2m run-off – or for coaching staff and substitutes to stay clear of the field of play and surrounds.

By contrast, on a pitch exclusively for five-a-side use, the enclosure will become an integral part of the field of play and a product like our Super Rebound becomes a must rather than an option for rebound properties that mimic an indoor wall.

In a similar vein, the architect for a new hockey pitch at King Edward’s Five Ways School in Birmingham specified our fine-grade hockey mesh installed by Midlands CSB for the full 3m height of fencing behind the goals to reduce maintenance and whole life costs associated with more traditional wooden hockey boards.

So think about your needs three or five years down the line, for instance if you are planning to rent out the space to provide an income stream, as the more you can plan and specify usage at the outset, the more you can keep cost down as it evolves.

Next, think what is the environment like. Is this a pitch or court within school grounds, with use restricted solely to students at the school? Or is it in a public park with unrestricted play often out of hours? Will play be supervised or not and pre-booked or not? Depending on the answers to these questions, how are you going to restrict access to appropriate players and keep everyone safe, and felling safe, when inevitable clashes occur?

And what situation is your sports area located in? Nearby busy roads, railway tracks, canals or rivers and utility stations can pose risks and potential death traps for when balls inevitably escape the field of play.

5m high fencing will obviously keep more balls within the sports area than 3m – and minimise the risk of children running out of the enclosed area to follow a ball, potentially on to a busy main road.

Because of the risk of culpability, many specifiers are using netting above a fencing line – and even as a full canopy roof – to keep balls in.

But even these are imperfect as they deteriorate quickly, require a lot of maintenance and provide a roof or pockets above the fencing where balls can get trapped. And which 14-year-old with a brand new football isn’t going to climb up to retrieve their ball?

But net roofs are not designed to take a person’s weight – and the surface beneath is very hard. Protruding wires at the top of a fence line are perfect snag hazards for a ring as people jump up to dislodge a ball and I sadly know of too many instances of fingers being wrenched off in this way. That’s why we have introduced a safety channel that ‘caps off’ protruding wires.

Be aware also of complying with disability discrimination laws, so all gates should be 1.2m wide rather than 800mm and typically should open outwards, unless this risks them opening straight onto a ramp or stairway.

Position access gates at opposite corners of the field of play and perhaps colour them differently from the rest of the fencing so they are obvious even in the dark as an escape route for a solitary younger child feeling vulnerable if older teenagers arrive to play.

And even consider the ambient atmosphere. For instance, we recommend a special dual-layer ipond coating for the mesh developed by marine technologists for any pitch near to the sea, where salty air can reduce the life of fencing to a tenth of its normal.