A massive Middle Eastern contract has given rise to a new flat-panel mesh security fence from Zaun Limited.

Zaun has designed a variant of its original HiSec ‘358’ welded mesh configuration with an extra wire every 250mm on the inside to enhance security and keep the panel flat without the need for rails or pressed V-beams.

The British manufacturer will ship a staggering 200-plus 40ft containers of the new HiSec Plus panels over the coming year to secure a Middle Eastern site of critical national infrastructure.

The first six containers have left the manufacturer’s Wolverhampton headquarters with a further six set to leave before Easter.

The design department has offset the additional 4mm wires – setting quite a challenge to the production team – to enhance the security characteristics and make the single panel act almost like a dual skin fence.

Zaun research and development manager Adam Christie says: “It’s brilliant to see this new system coming off the production line as it’s been more than four years in the making.

“The customer had a very clear specification of what they wanted, but we’ve been able to work with them over time to make enhancements and to reassure them at every step of the way on quality, design, production, sourcing and logistics.”

The additional horizontal wires of HiSec Plus rigid fencing remove the typical bowing of traditional 358, while the 2.4m-high fence line is further secured with stainless steel razor coil topping and coated barbed wire as line wires.

The panels are bolted to 5mm-thick cold-rolled steel posts, which are being welded to steel base plates at Zaun by a new robot welder bought specifically for the task, with each post and base plate a massive 75kg in dead weight.

The rolled steel is folded back on the front attack-prone flange of the post to create an effective 10mm thickness of steel.  The post assemblies are then bolted in the field to a continuous concrete beam.

Zaun’s HiSec 358 is approved by NOMS for use in HM Prison Service where this mesh type is used prolifically due to its tight mesh formation and the fact it can go to 5.2m in height in a single panel.

It can easily be integrated with different toppings, as in this case, and with CCTV, PIDs and other electronic security enhancements. 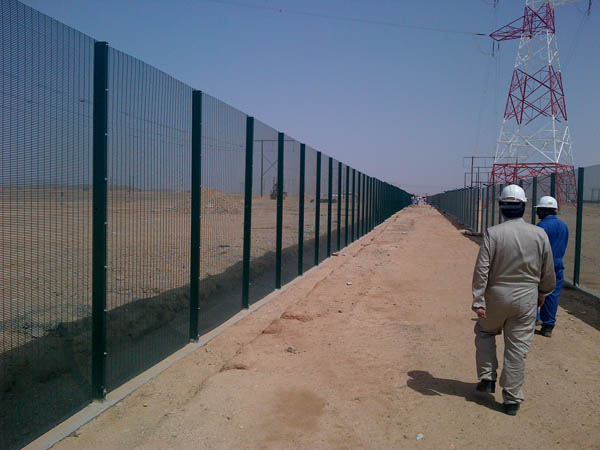