Warming up for Wimbledon with a tennis trivia post

We’re just seven days away from one of the fixtures of the British sporting calendar – the Wimbledon Championships at the All England Lawn Tennis Club, the oldest tennis tournament in the world.

That means today the longest route of all to the title begins – three weeks and 10 wins – with qualifying until Thursday at the Bank of England Sports Centre a couple of miles away in Roehampton.  16 men and 12 ladies will enter the main draw next week having won three rounds at Roehampton.

They’ll have to make history to lift the historic trophy – and go two steps further than John McEnroe, who came through qualifying in 1977 as an 18-year-old amateur and made it all the way to the semi finals, only to lose in four sets to Jimmy Connors!

Zaun has worked with Wimbledon for many years, initially with head groundsman Eddie Seaward, who retired two years ago, and since with his successor Neil Stubley, who manages a permanent team of 16, boosted to 28 for the period of Wimbledon, to maintain 19 Championships grass courts, 22 practice grass courts, eight American clay courts and five indoor courts.

We supply 4m high removable posts, which slot into purpose-built sockets covered by caps while not in use, that suspend nylon setting to separate some of the outer courts outside the fortnight of the Championships.

So, as well as qualifying at Roehampton this week, the removable Zaun posts will be coming out, temporary spectator seating will be going in and an army of 6,000 stewards, ball boys and girls, line judges, catering workers and the like are all being trained to greet the nearly half a million spectators paying to attend during the two weeks.

Wimbledon is unique. It is the only Grand Slam still played on grass since the Australian Open ‘went hard’ in 1988. 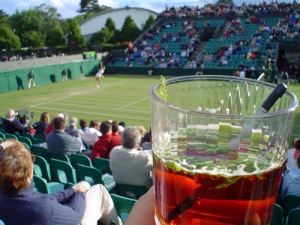 Traditions include ‘A list’ Royal spectators, a strict dress code for competitors, the eating of knocking on for 30 tonnes or 150,000 strawberries and cream by the spectators, the supping of 25,000 bottles of champagne and 200,000 glasses of Pimm’s. The tournament is also unusual for the absence of sponsor advertising around the courts.

Other mind-blowing stats include the fact that The Championships will be broadcast to a global audience of almost 400 million and about 55,000 balls will be used during the fortnight.

Wimbledon boasts the longest match of all time at 11 hours and five minutes. You may remember the staggering 138-game, eight-hours-11-minutes fifth and final set of 2010 played over three days.