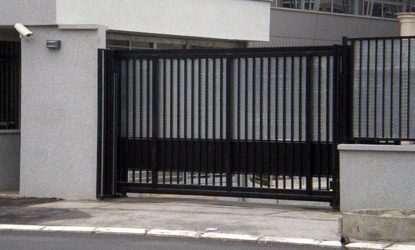 Constructed from steel sections, this gate design aesthetically blends into the building or perimeter fencing line. Available with your choice of vertical bar, welded mesh or woven mesh infills ideal for complementing our range of perimeter fencing.

The product is also able to accept any architectural enhancement over and above its standard construction; therefore it lends itself to the continuation of any high security fencing specification, powered fence or security toppings across the normally vulnerable entrance to a site.

Also manufactured from steel sections and proprietary folded track to EN/BS standards with a nominal opening available up to 8000mm. The height of each is available from a minimum of 1800mm to a maximum height of 2400mm. Each gate is available with a variety of infills including vertical bar and welded mesh.

Each gate is also available with either a standard proprietary sliding gate rack drive system, including integral logic control panel. Or also for intensive use, and for faster opening / closing, heavy duty drive unit, including a programmable logic controller (PLC).